If there’s one thing most Game of Thrones fans can agree on, it’s that the final season was, well, DIFFERENT than we’d expected. Some hated the way things turned out. Others lived with it. I don’t know any who were exactly thrilled how that final curtain closed.

We can unleash the hate on HBO, wail at the writers, even start a rumor that Steve Harvey accidentally handed everyone the wrong script. But it won’t do any good. It’s over. And unlike the Hulk or Spider Man franchises who seem to enjoy the “do-overs”, I don’t think we can expect one from the folks of Westeros.

There’s the old saying about making some people happy all the time and all the people some of the time, etc. etc. And it certainly applies here. But what DID everyone want? What would’ve made hordes of fans stand and clap and cry instead of millions of us, screaming to the sky, a collective WTF?!!!!!

It got me thinking. How would I have ended it? Did I think I could do any better? I can answer that question with a resounding no. But IF HBO, George RR Martin, and Jesus invited me to dinner and said “Tim, we’ve got nothing. We’re totally burnt on ideas here. What do you think? WWTD?”

Here are the top five things I would’ve done differently in the final season:

The Night King and his White Walkers 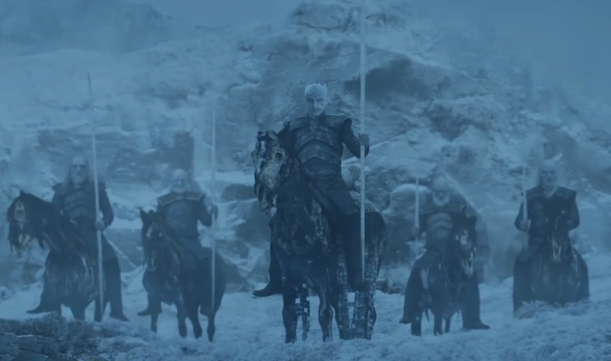 To have been so afraid of these uber-albino bastards for seven seasons, they sure went down with one big bitch slap. I mean they’ve been shuffling along for years towards this ultimate showdown, you’d think they could’ve at least got in the damn game a little more. Was it awesome when Arya flew out of nowhere like a rabid spider monkey and prison shanked the Night King? Sure it was. But I would’ve at least let him or his Jackson 5 White Walkers do SOMETHING cool. Maybe a little Crane style Kung Fu or even an upbeat musical number! Whatever. Would’ve been nice to see them in action before they exploded into crystal meth flakes like a North Pole piñata! 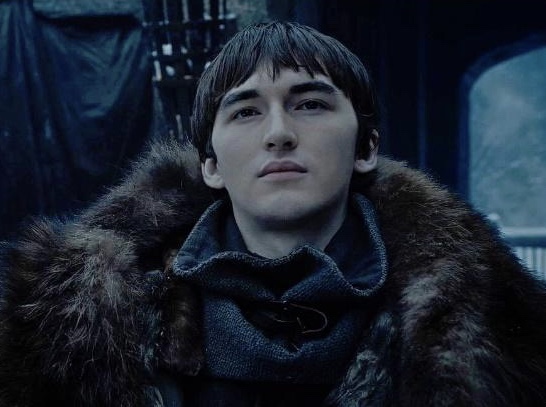 If Winterfell was a football team, Bran was that guy on injured reserve all season who still got a championship ring. Only in his case, he got the MVP crown too! I mean, if you wanted someone to hang around and act superior to everybody, well, he nailed it. But they could’ve given him more to do than correct everyone’s grammar and or even helped him extract a little revenge. I would’ve let Jaime Lannister climb the bell tower, sound the surrender, and then get swarmed by Bran’s ravens and driven over the ledge to his death. Or an even better payback, a crushed spine and a lifetime date with a wheelchair. Bran be like: Vroom vroom, motherfucker. Have fun spinning in circles with your one good hand, ya gold-fingered bitch! 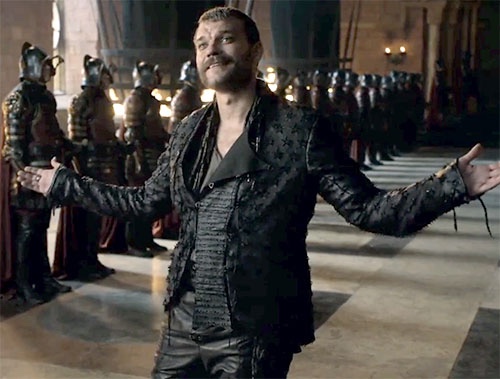 To have gotten in the game late, he raced to the top of the leaderboard for “Most Douchelike”. And it was lining up as if he would be a major player. He was arrogant, boastful, but his hipster beard made him look more like a speakeasy bartender than a world conqueror. And of all the guys Cersei could give it up to…him?!? Even after that “earn a queen, buy a whore” speech she hopped onto her back faster than a hooker with overdue rent. I know she had her motives and needed to cover up yet another brotherly love pregnancy, but at least make the guy work for it.

Anyway, as deaths go, he went out the old fashioned way: Mortally wounded in the sword fight with Jaime that, until the end, looked like Euron was going to win. And given what he was mouthing off about, Jaime was the right person to cut him down. Bur can we up the “hell yeah” factor for the loverboy death match. Move this fight onto the deck of the last working war ship docked in the bay and let them duke it out, cut and stab the as they did in the existing scene. As Euron walks off, busy bragging and patting himself on the back, Jaime pulls the trigger of one of the massive, dragon-killer harpoons! Euron hears the release, and turns just in time to get drilled straight through the chest and nailed to a port wall like a modern-day concert promo flier. THAT’S how you snuff out a character everyone hates. Sayonara, jackass! 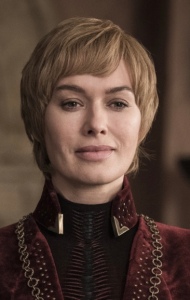 For someone who inflicted pain almost every time she opened her mouth, Cersei sure got off easy. Not that being crushed under tons of stone was a peaceful end, but it did lack flair. Shit, they might as well have had her go for a stroll in the garden and drown in quicksand🙄. I have two ways that would’ve been for more fitting for such a capital bitch.

Option 1: Over the seasons, we’ve seen Daenerys use her dragons to execute players both big and small. We watched her punch the crazy card and burn an entire city of common folk, just to prove a point. Admit it: Torching Cersei would’ve felt a bit like a rerun: Dracarys Beentherys.

Instead, while flying around the city, they take a breather and perch on a castle rooftop, catching Cersei staring out the window at her kingdom in flames. Their eyes lock. Cersei, with her bottomless glass of Bordeaux and her SportClips haircut. Cersei, who had made great spectacle of chopping off the head of Daenerys’ translator and BFF, Missandei.

Dany’s eyebrows furrow, her lips curl back over her teeth in that “I’m so cute when I’m mad” look she has, and then she spits out a new command she just learned at PetSmart: Decapitys

With a quick growl and a dramatic, sweeping arc of his neck, Drogon bites off Cersei’s head. And before we can recover from this visual assault, the rest of her lifeless body tumbles out the window, face-plant style (irony noted, since she’s now headless) in an homage to her son Tommen, who killed himself by jumping out the same window in Season Whatever.

Thanks to Cersei’s intense brotherly love, Ned Stark was beheaded and Bran Stark was pushed out a window. She kind of got away with that one if anyone’s counting revenge points. And by Season 8, there are only a few Starks left who can right this wrong. Arya had her moment in the sun taking out the Night King. Jon “Who’s my Real Daddy” Stark his hands full with Daenerys. Bran is too busy being cryptic or staring off in space. This leaves Sansa.

She proved she could take someone out when she turned Ramsay Bolton’s own hounds on him. Now she needs to hit back at the woman who got Ned killed. If Cersei wants the Iron Throne so badly, why not make it a permanent accessory?

After a surprising the Queen trying to escape through the tunnels, Sansa throws down some serious gangsta disrespect. There’s a slap. A counter-slap, and soon a full-on chick fight ensues, complete with hair pulling and bodice ripping. Sansa manages to come out on top and by now has some backup. Fast forward to the penalty phase. After lots of flowery speeches about wrongs and evil doers, Cersei is chained to the Iron Throne and shoved over the cliff into the bay. Glub, glub…ya’ salty bitch. 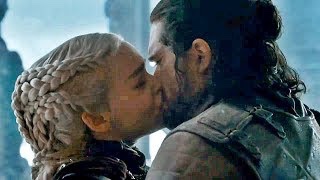 This is the toughest one. She loves him. He loves her. But something had to give. She’d just barbecued an entire city and would have continued doing so until they were all “liberated”.

And too many people knew a) He was the true heir to the throne, and b) Turned out they’re related by blood, so they couldn’t keep shacking up and pretending it’s cool. So he listened to her rationalize her crazy plans one more time, gave her a big farewell kiss and pierced her heart. Literally.

How else could this have played out? Remember, they loved each other, so it couldn’t be too grisly and remain believable. I’d really only change two things here.

First, structure the scene so she gets to sit on the damn chair before closing the book. Thousands died to make this moment possible, and her royal Targaryen ass cheeks deserve to at least fart on the Iron Throne to see if it echoes. Maybe she even lets Jon sit on it for a moment, hoping to bring him more to her side…like a test drive in a new Ferrari. But then she remembers he has a legitimate claim to sit there and something, almost imperceptibly, snaps.

She and Jon talk it out a little more, share their last kiss, and when the camera pans in tight so we can only hear the sound of someone being stabbed, both their eyes open wide…Because as he tearfully slides the blade home to save the people of Westeros, she, to ensure an unchallenged reign, drives a shard of dragon glass into his chest!

How much more would you have bawled at that point? To me, it’s literally twice as tragic. And also more fitting when Drogon loses his shit and turns the Iron Throne into molten slush as if to say “All this killing over a fucking chair?”

As for everyone else, (who’s left at this point?) they load up the boats and head to Ye Olde Olyve Gardyn for bottomless salad and breadsticks. Lord knows they have to be starving!

Final note: I loved this show and I am not trying to dump on someone else’s creativity. Think of this post as a fan fiction piece of what could have been. Nothing more. Nothing less. For the Realm ✊🏻😔