When you travel a lot for work,  it can start to feel like Groundhog Day. The alarm goes off and your first concern isn’t the time. Pffft. Who cares what time it is…what day is it? What city?

After my hotel stay this week near DC’s Dulles Airport, I thought it appropriate to post an excerpt from my book, Boarding All Rows. Last Friday morning didn’t only feel similar, but exactly, like one from two years ago.

Chapter 14 – Shower in the Sink

Historically, hotel beds are not the greatest. I call them ShittyRests because that sums it all up quite nicely. Sometimes they are so bad, I pull back the sheets to see if they accidentally put the box springs on top. I get it, though. I flip out when I have to buy one new bed. I can only imagine the cash outlay for an entire hotel. But mattresses are a large part of the business they are in—the sleeping business. This is definitely not an area consumers want them to cut corners. Behind mattress and pillow companies, no one should care more about our snoozing than a hotel. Lucky for us, fierce competition among brands has forced them to start improving this, but there’s still a long way to go.

In all my travels, there was one shining exception—The Ritz Carlton Lake Las Vegas. If I had to describe their bedding, pillow, and mattress combination with only one word, the choice would be easy. COMA. Saying “I felt drugged” is a gross understatement because it was the equivalent of floating through a valley and eating an entire field of opium poppies. And like a heroin addict trying to replicate that first high, I’ve been chasing the dragon of the Ritz ever since. There’s an urban legend about a man who wakes up in his hotel room to find he’s missing a kidney. I’d wager that if he’d been in a Ritz bed, he would have rolled over and gone back to sleep. He truly wouldn’t have given a damn. 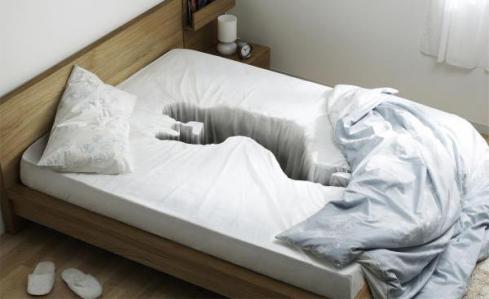 Sadly, I’m not staying at the Ritz. After a short night’s sleep on the ShittyRest, I finally quit hitting the snooze button. I can put it off no longer. Gravity helps me ooze out of bed in the direction of the bathroom and I start fumbling for the light switch. This one is some sort of puzzle which takes a minute to solve, a phenomenon that is becoming more and more common. In an effort to be “greener,” some hotels use switches that are tougher to turn on than a gay man marooned with Amazon women. Press the button. Dark. Press it twice. Dark. Press and hold it. Still dark. Jump down, turn around, pick a bale of cotton! Just turn on, dammit!

Finally, it flickers on, instantly blinding me. I don’t remember it being brighter than the sun, but I slept wearing half of my clothes, so what the hell do I know? I slowly open my eyes and am startled by the hideous man in the mirror. He looks kind of like me, but with a puffier face, bulging fish-eyes, and less hair. I’m not the young, fit, high school version of me that I was just moments ago in Dreamville. Now I’m older, balder, and about ten thousand cheeseburgers thicker. The small but existent six-pack has been replaced by what looks to be a pasty exam glove stuffed with oatmeal. This makes me sooo happy to strip the rest of the way down and get in the shower.

I’ve affectionately titled my second mental challenge of the morning, The Riddle of the Flow. After years on the road, I’m convinced that no two hotels have the same shower handles. It wouldn’t surprise me if none of the hotel rooms have the same handles. Pull it. Nothing. Twist it. Nothing. Twist the other way. Nada. In my mind, I can see the engineers at Kohler huddled in front of an observation window; their IQ’s snickering at my lack of problem solving skills.

“Didn’t we test that with monkeys?”

“Yep. Flow was achieved in an average of nine seconds.”

“How long has this guy been at it?”

And then they all laugh again and head off to the nerdery.

Now, pissed off at the imagined sleight, I accidentally tilt it while yelling, “Turn on, God Dam—” and outshoots the aqua. “Ha!” I claim victory, happy I’m not so dumb after all.

One thing to note, there are actually only three settings on hotel showers.

Dialing in a comfortable temp takes the skill and patience of a Ham radio operator. Check it. Cold. Check it again. Still cold. Check it two seconds later. I yank back my hand, and stare at the newly exposed bones where the skin on my fingers used to be. With my other hand, I manage to get it adjusted okay. Good thing I’m not a lefty.

I step in, pull the curtain, and let the hot water do its thing. I begin to feel alive again. I melt into the water and let the energy flow through me. No, wait. That’s pee. I feel pee flow through me. Yeah, I said it. I peed in the hotel shower. And don’t make that face because you know you’ve done it. And so has every person in the hotel room before me, and you, and everybody in your family does, too.

Once I’m done emptying my processed Dr. Pepper, it’s time to get clean. But somehow I notice the water droplets hitting the bottom of the tub are making a lot of noise. I glance down to the revelation that housekeeping left the drain closed, and now I’m standing in a warm broth of my own urine. “Damn it!” I growl, as I unplug the drain and reach for the soap. Now it’s really time to get clean. “Son of a bitch!” I forgot to bring it, and the shampoo, into the shower. Looks like another day, starting off with a bang. When it’s a small bathroom, I can stretch out—a plump, pale ballet dancer auditioning for Swan Lake and grab them off the counter. A bigger room means I have to get out and go fetch them, and not slip and bust my ass on the tile floor. Today of course, I have to get out.

In the grand scheme of things, this is not a huge deal. I imagine homeless folks often go days without a shower. People in some third world countries risk life and limb to bathe in rivers filled with crocodiles and hippo shit. I get it. These are first world problems. But my point is simply this: why not put them where guests are going to use them? Is this too big a jump? Do I bathe in the sink? No. No, I don’t. They don’t put the toilet paper in the mini-fridge or cram the pillows in the safe. They put them where we use them. Spend less time worrying about what brand of coffee is in the room and think harder about things that matter.

Speaking of harder, this trend of ultra low-flow showerheads should go the way of the dodo. Even if I haven’t been working in a coal mine, it’s hard to rinse off when the water comes out just harder than the force of butterfly pee. I know it says on the brochure that you’re trying to save the planet, but we all know you’re just trying to save on your utility bills. If you were really concerned about wasting water, you’d march your asses outside and turn off the sprinkler systems when it rains.

I can literally count on one hand the number of hotels that do this right. It’s not as if I’m asking them to make the bathroom feel just like home. Hell, most of the hotels I stay in sport a setup that makes mine look like an outhouse. I know I’m not that bright, but this focus-on-the-customer idea doesn’t seem like rocket science.

One thought on “Do You Take Showers in the Sink?”